If you are a new skydiver, I am sure you can relate to the feeling of being at the drop zone and hearing all the skydivers talking and saying things you just don’t quiet understand yet. Of course I remember back to when I began, hearing all the jargon that skydivers used. Often I would become easily lost in the conversation, only nodding my head and hoping one day I would understand what they heck it was they where saying. Skydivers use a lot of words that will soon become familiar and likely used often by you too. However, to a new skydiver, or our non-skydiving friends, we most likely sound kind of strange. So in this article we are going to go over some of the most common terminology that skydivers use. And soon you won’t feel like your new friends are just speaking gibberish!

This is an acronym and it stands for Automated Activation Device. An AAD is a highly intelligent, and very important piece of our skydiving equipment. An AAD automatically deploys a skydivers reserve parachute at a certain altitude if they skydiver has not already done so themselves for any reason. For example, lets use the simple example of a skydiver becoming unconscious during freefall. The AAD will deploy the reserve, as it will detect by a certain altitude that the skydiver has not deployed their canopy and are still in freefall speeds. An AAD is also often referred to by its manufacturers name as well, which is mostly commonly a CYPRES or VIGIL.

An audible altimeter is an electronic device that alerts skydivers at pre-programmed altitudes. It is also commonly referred to as a dytter. An audible is a great device, because it can be pre-set to give an alarm at the skydivers chosen altitudes. It can be set to go off for break offs, for when a skydivers needs to deploy their parachute, and also for landing patterns and high performance canopy piloting landings. This allows skydivers to know what altitude they are at by the noises, rather than having to constantly check a visual altimeter located on their wrist.

If you hear someone say boogie, pay attention! Boogies are fun skydiving events, usually hosted over a few days. Boogies are great fun and they bring skydivers from all over to meet at one drop zone. They host load organizers, raffles, party nights, food trucks and sometimes novelty plane jumps! You can have all sorts of skydiving fun like hoola-hoop jumps, or maybe even a helicopter jump! Basically, the event is set up for fun jumps, meeting new people and enjoying a great party.

If you are new to skydiving, you will learn quickly what break-off means. Its a pretty important topic. It refers to the ending of skydive freefall, where at a pre-agreed altitude, skydivers with create horizontal separation between themselves. This way they can deploy their parachutes far enough away from one another. Sometimes you will hear people super excited saying “that was a sick break-off”! This is how to talk like a skydiver.

A burble refers to the “dead pocket of air” that is above someone in freefall. It is a zone of turbulence above a skydiver. Its important for skydivers to be careful when flying above a friend, because this burble zone might cause them to sort of fall on top of the skydiver below them. Which can obviously be dangerous.

If you walk around a drop zone on a busy day, you will hear people talking about dirt diving all day long. And its a pretty weird expression if you don’t know what it means. A dirt dive is when the skydivers who are jumping together, rehearse their jump plan on the ground. This idea of a dirt dive is to practise on the ground, to ensure everyone knows what they are suppose to do during the skydive. Its an important part of a successful jump.

During a skydive when one skydiver connects onto another, for example with their hand on another’s arm. This is referred to as a dock or grip. If skydivers are jumping together in a head down static jump, once they ‘dock’ on each other in the planned location, they can move to the next formation and dock in the next arranged spot.

This is a hot topic at every drop zone around, downsizing! Downsizing is the act of changing your current parachute canopy to one with smaller square footage. A bigger canopy is more safe for beginner skydivers, and as you gain experience you begin to change your canopy size. This is downsizing, and its a common topic between skydivers. And you will certainly hear it a lot.

An exit is the very beginning of freefall during a skydive. It is when you exit the plane, pretty obvious right? A skydive exit is a pretty important part of the jump. If you begin with a great exit, it sets the tone for a nice jump! Especially when advancing in skydiving, you want a good exit, close to your mates so you can start flying together right away. During the beginning, your exits can create a lot of space between skydivers, so they have to spend a part of the short free fall catching up to one another.

This is a funny word, indoor skydiving, because technically you are not skydiving. You are flying indoors in a vertical wind tunnel. So if you get confused when you enter the sport and hear indoor skydiving for the first time, don’t worry, you wouldn’t be the first person confused. Indoor skydiving is extremely fun and a great way to practise your freefall skills.

These skydivers are usually with a decent amount of experience, and are able to organize jumps in a fun and inclusive way for a group of skydivers. Load organizers can be hired to work at skydiving boogies, skill camps or even work directly for a drop zone. It is nice to have a load organizer, because they put together a jump plan and make it more approachable for others to jump together.

Manifest is going to be where you give all your money away as a skydiver, so you will become very familiar with this word. The Manifest is the drop zone staff who are taking care of organizing each skydive aircraft load. You will give manifest your jump tickets, and they will put you on the next available skydive load. Part of the job of manifest is to organize the loads strategically for tandems, students, and fun jumpers. And their job can get pretty hectic on a busy skydiving weekend.

What the hell is a Mr.Bill? This one might take you a while to hear at a drop zone, but it will eventually be said around you. And you will likely be pretty confused to what it means. A Mr. Bill is a name for a specific type of skydive. It is when two skydivers jump together at once, but one is clinging onto the other one. The skydiver holds on tight as the other deploys their parachute. Now one skydiver is hanging on tight to the other, who has their parachute above their head. The hanging skydiver now gets to enjoy a canopy flight hanging on to a friend! Once they are ready, the skydiver can drop off from their friend back into freefall, and then deploy their own parachute. Its quite a jump to accomplish, and great for a beer story around a camp fire.

PLF is an acronym for parachute landing fall. It is a safety technique that is meant to allow skydivers to land safely without injury. It is practised by both military paratroopers and recreational skydivers as well. The technique is used to displace the energy of the body contacting the earth at high speeds. So in the situation where a skydiver might not have a proper landing, they may need to perform a PLF to avoid injury.

Every six months (in the USPA), a skydiving reserve parachute needs to be opened and repacked to ensure it is in condition to deploy in case of an emergency. This reserve repack also will happen when a skydiver needs to deploy their reserve parachute in the event of a malfunction.

As a skydiver, your rig is your most prized possession. Your baby. A rig is referring to your skydiving gear, your magic backpack!

This is a type of advanced canopy flying. A canopy pilot trains to make high performance landings, which are at high speeds and generally under smaller canopies. This is a very fun and popular discipline in the skydiving world. Flying canopies with high speeds during landing can be extremely dangerous. And so swooping required courses, training and practise.

So now you are all caught up on the most common skydiver terminology, you will understand your new skydiving friends a bit better! You are ready to head to the drop zone and talk like a skydiver.

If you like the article, please let me know, send me an email or a message on Instagram. I want to know about your experience and thoughts!

Support this blog by wearing our Colorful Jersey. Find more at our Online Store – www.ColorfulJerseys.com 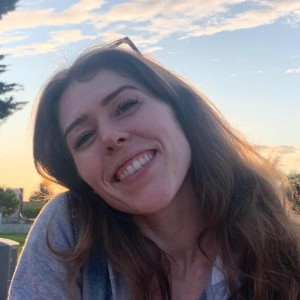 Cori is a skydiver from Canada. She works as a tunnel instructor in Flyspot Katowice.